YPJ: We promise to realize the dreams and ideals of our martyrs

“Women fought not only in the defense units, but also represented the vanguard in building a multi-ethnic, emancipated and democratic society,” the YPJ said on the anniversary of the liberation of Manbij.

On August 15, 2016, the northern Syrian city of Manbij was completely liberated by the Syrian Democratic Forces (SDF) – thus ending the more than two and a half years of rule of the “Islamic State” (IS). For the IS, the loss was a heavy defeat, as Manbij was considered the “secret capital”, located on the strategically important supply route from the Turkish border to Raqqa, where suicide bombers were trained and sent to Europe, among other places.

Shortly before the SDF launched the liberation offensive at Tishrin Dam on June 1, 2016, the Manbij Military Council had been established by the SDF led by the People’s and Women’s Defense Units (YPG/YPJ). One of its co-founders was Abu Leyla (Faisal Abdi Bilal Saadoun), who was hit in the head by shrapnel during an artillery attack on the third day of the operation. When Abu Leyla died on August 5, the offensive on Manbij was named after him.

The battle for Manbij, which had been under IS terror since 2014, lasted a total of 75 days. It was a complete success, in which YPJ fighters played a major role. Unforgotten are the images of women who burned their veils and lit cigarettes after liberation, of men who had their beards shaved in public, and the relieved and beaming faces of children. But the fight for a free Manbij was also very costly. Large parts of the city were destroyed, about 300 fighters were killed, among them some internationalists. 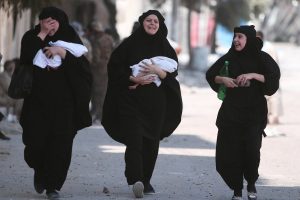 After the liberation of Manbij, the SDF faced the challenge of bringing the population together around the political project of the “Democratic Federation of Northern Syria”. Manbij is an ethnic and linguistic mosaic, whose inhabitants consist of about 70 percent Arabs, 20 percent Kurds, five percent Turkmen and a small number of Circassians and Armenians, who for decades were divided by tribal conservative policies promoted by the Syrian regime. During the years under the control of the IS, this policy of division intensified.

In autumn 2016, the Military Council handed over the administration of the region to the Civil Council of Manbij. In the following March, the Civil Council was renamed as the “Legislature of the Democratic Administration of Manbij” in order to broaden its scope and increase its democratic legitimacy. Right at the beginning, a gender-equal dual leadership of one woman and one man was introduced in all offices, so that the proportion of women in the administration is 50 percent. The management of the self-administration consists of 132 persons. All social groups are represented according to their population shares. The importance of Manbij is thus not only explained by its geostrategic position in the overall Syrian context, but also by the political system established there since August 2016, which has a very high democratic claim and is considered a model for a new democratic Syria. This model of society has enabled a trusting and secure environment to be established, in which women have fought for their rights and now play a role in all areas of administration and life. 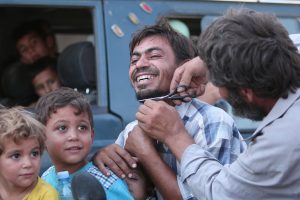 YPJ: We will maintain our achievements

“Through the leading role of women in the revolution, a consciousness for a free and organized life developed among the peoples in the liberated areas in the north and east of Syria. Women fought not only in the defense units, but also represented the vanguard in building a multi-ethnic, emancipated and democratic society,” the YPJ General Command said on the fourth anniversary of the liberation of Manbij.

The YPJ statement continued: “The liberation offensive for Manbij was also the gateway to the festival of the peoples of the Middle East. The people who fought here, rose up against the IS and opposed the patriarchal mentality in the spirit of resistance were welcomed with open arms. The people were able to break through the darkness of the reign of terror that enveloped them and express their joy at the light in the darkness of the IS terror. Just as the ISIS embodied the most abysmal brutality, the women-led liberation of the city provided the air for the peoples thirsting for freedom to breathe. The unifying spirit created by this achievement developed into a liberation victory in the person of the peoples.

Based on the principle of a democratic nation, the people of Manbij built their own social system. In a powerful way, they realized their self-defense. With the liberation of the city and the growing mobilization of women, the foundation was laid for an autonomous women’s combat unit to be established. Thus the YPJ developed into a versatile army that was based on its independence and fulfilled its avant-garde role in the following offensives. The YPJ created the claim to form a defence force that fights and wins against reactionary forces. 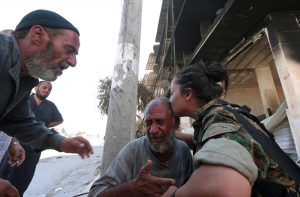 Today our region is again exposed to provocations. Both the disintegrated Ba’ath regime and the Turkish occupying state are using various methods to destroy the project of the democratic nation and to crush the SDF that emerged from the youth of the peoples. Therefore, it requires an even greater awareness and organisation. In order to respond appropriately to these provocations, strong unity and powerful cohesion are needed. This is the key to a free future.

The dreams of martyrs will be realized

The brutal violence of the jihadists against women, which has reached a climax today, reflects the true face of the mental backwardness on which the nation state is rooted. Hegemonic forces that are the creators of this system, especially the colonialist and genocidal Turkish state, are attacking the values of women. Although the aim of these attacks is to hit the achievements of the popular revolution in the person of the women’s revolution, the women’s determination for freedom in connection with the unity of the peoples will always remain alive in the ideas, thoughts and history. We promise to protect our achievements and realize the dreams and ideals of our martyrs.” 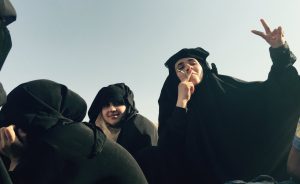 Freedom is in the unpoliced spaces founded in Breonna’s name

Webinar on Feminicide and Self Defense with YPJ commander Aryen

YPJ: We promise to realize the dreams and ideals of our martyrs